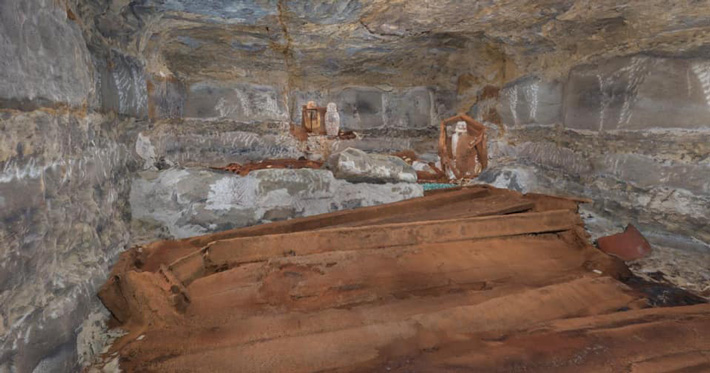 CAIRO, EGYPT—Based on an Ahram Online report, Mostafa Waziri of the Supreme Council of Antiquities introduced that Egyptian and German researchers from the College of Tübingen found a further burial chamber on the backside of a communal burial shaft in Saqqara. The burial shaft is related to a mummification workshop and 5 different burial chambers dated to the 26th Dynasty (688–525 B.C.), which had been unearthed in 2018. 4 poorly preserved picket coffins had been discovered within the sixth chamber. Ramadan B. Hussein of the College of Tübingen mentioned one of many coffins belonged to a lady named Didibastett, who was buried with six canopic jars. Historical Egyptians had been normally buried with 4 canopic jars, Hussein defined, which held the embalmed lungs, abdomen, intestines, and liver of the deceased. Computerized tomography scans of Didibastett’s two further jars recommend they comprise as but unidentified human tissue. Waziri added that chemical evaluation of artifacts recovered from the mummification workshop by scientists from the College of Tübingen, the College of Munich, and the Egyptian Nationwide Analysis Heart has detected traces of bitumen, cedar oil, cedar resin, pistachio resin, beeswax, animal fats, and presumably olive oil and juniper oil. For extra, go to “Mummy Workshop,” considered one of ARCHAEOLOGY’s Prime 10 Discoveries of 2018.